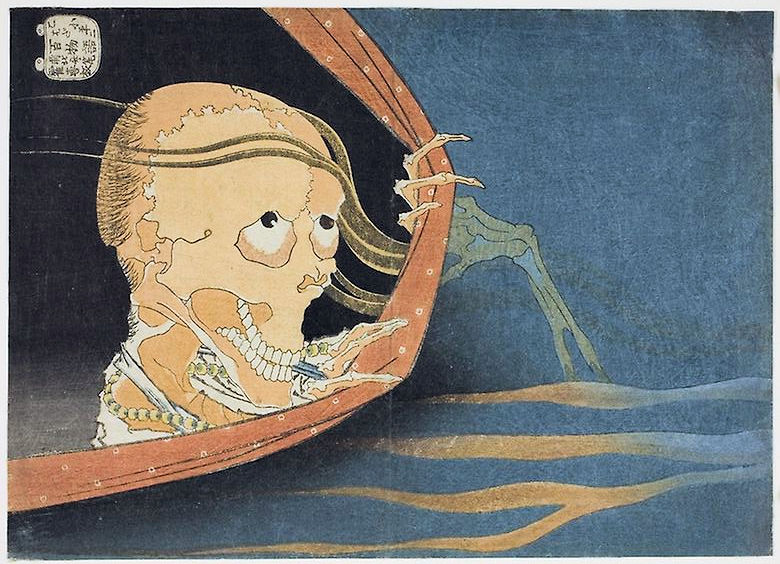 Long ago, Asians believed that disease was the result of evil spirits who entered the body to agitate it, disturb it and ultimately make it crazy or deeply ill. This way of thinking is the result of shamanism, the ancestral form of medicine in all parts of the world. It was therefore necessary to drive away diseases, both in the body and in society, hence the numerous ceremonies whose purpose was to scare away the demons with great blows of noises, music and firecrackers. Thus, both the social body and the carnal body were freed from evil influences. After explaining the shaman Ling points (灵), here are the points to watch so that no evil spirit arises to disturb the Qi.

As early as 702 AD, Emperor Mommū (683-707) composed a code containing the first directive of medical practice in Japan. The curriculum and the distribution of specialties are copied from the Chinese model. A medical academy was established in the capital (Fujiwara, Yamato Province) and run by the royal court and only sons of good families could enter. But medical colleges also appeared in the provinces, their entry was less restrictive.

It is interesting to note that if the art of pharmacopoeia, massage and acupuncture are already present, exorcism is still part of the program. And yet, in 702, we are already far from Chinese proto-medicine and its roots. But ancient concepts die hard. The Japanese also believe, because of an active shamanism, that evil spirits must be extirpated from the bodies to get rid of the disease. Not only is this idea consistent with Japanese shamanism, but it also finds a coherent echo in classical Chinese texts.

Indeed, the famous physician Sūn Sīmiǎo 孙思邈 (581 – 682), author of the Qianjin Yaofang (千金要方) (the “Essential Formulas for Emergencies [Worth] a Thousand Pieces of Gold “[i], described a list of 13 points that would be “ghost” points, which should be watched like milk on fire. If these points become weak, then spirits could settle there and sow disorder within the virtuous balance of correct Qi (Zheng Qi).

Let’s first see what the Chinese character 鬼 (guǐ) means. According to Philippe Laurent [ii] who remains the reference in terms of understanding the names of Chinese points, we must look at the evolution of the character over time and the different Chinese spellings that have made it evolve.

The first part of the kanji indicates the character 白 (bái) for “white”. This key is important because it tells us that it is something pale, much like Casper the little ghost we draw today, but also like everything that once related to the earth (including buried people) as in the name of the point Spleen1 隐白 (yǐn bái) or “Hidden White”. The second part represents a head with a cross, as in the character of the “field”, to exaggerate this aspect of the ghost. Below we can guess a blurry body, dancing a little, as if floating in the air. The small hook indicates a whirlwind that the breath of the spirits creates behind them (a window that closes, a door that slams …). Finally, the Chinese image of the ghost is not far from the European one. It can be noted that in the simplified version of modern Chinese (the last one on the far right), the “white” key has disappeared, but this is not very important, since the body of the character remains the same.

The simplest translation into English is “ghost, phantom”. But we can also read in the dictionary the terms of “genies, souls of the dead, demoniac, treacherous, sneaky, mischievous”. The indication is therefore very clear: these spirits are not beneficial. Why? The Chinese have always strongly worshipped their ancestors. It is not enough to bury them; it is essential to do the correct rituals and to feed them on the altar of the ancestors. It would then be the spirits who have not received the rituals and love of their descendant. Their souls come back to haunt the living.

Then we look at how the word “soul” is said and then, many things light up: 灵魂 (Línghún) is composed of 2 magnificent characters:

Last thing about the word 鬼 (guǐ). It was once used to refer to the nomads of the north who came from Mongolia to devastate the Chinese plains. It is therefore a pejorative word that was later taken up under the term 白鬼 (bái guǐ) to designate the whites who colonized China from the 18th century. This word is still used today. [iii]

The one who listed the guǐ points is one of those great doctors who mark the history of classical Chinese medicine. Sūn Sīmiǎo 孙思邈 (581 – 682) was a Chinese Taoist physician and alchemist of the early Tang period, born near the capital Chang’an, in the Shanxi Province. Taoists are not only keen observers of environmental and human nature, but also the heirs of proto-historical shamans. There is still a Taoist shamanism today. His work of the Qianjin Yaofang (千金要方) is certainly the most cited during the 1st millennium. As a good Taoist, he was part of the tradition that saw disease as the result of the agitation of ghosts, hence the large number of talismans and the use of incantations, magic writings, drugs and aggressive fumigations to rid the sick of their demons. In chapters 29 and 30 of his book, he explains “The Classical Prohibitions” Jìnjīng (禁记) which consist of a series of magic formulas. The practitioner had to contact the supernatural forces to heal with this incantation: “I am responsible for the sacrifice to the heavenly master; Heaven and Earth send me. I have [authority over] the heavenly soldiers: 100, 1000, 10 000, 100 000 [soldiers] are at my side and behind me. What demon dares to approach here! What a demon dares to be present! Only a legitimate mind can appear here! Evil demons flee! Leave quickly, quickly, it’s an order.”

But he also used needles, and it was finally thanks to them that he found the points that are particularly agitated in the case of an illness. He grouped them into a family called “the 13 Gui points”.

Sun Si Miao was renowned for his medical ethics, caring for the powerful as well as peasants, rich and poor, all sexes and ages, without distinction. This is one of the reasons that made him so famous, because he was loved by all. One might be surprised today, because this ultimately seems quite normal for a doctor, but it must be remembered that at the time Confucian morality made a distinction between “good people” and poor people, and it was normal not to consider everyone on an equal footing. It is only in the West, since Greek antiquity (1000 years before Sun Si Miao), that the Hippocratic Oath was taken to treat people of all situations.

It is time to study which points are the ghost points. These points are not unknown to you, because you already use them in your practice. The reason is simple: none of them has the word guǐ in their main name, but only in the secondary name. As if Chinese medical history had wanted to hide these points to get a new look. That is why it is always interesting to read at least once in your life all the names that each point has.

Let’s take Sun Simiao’s list, as he decrees them in his book.

All these points are interesting and well known because they are used in multiple treatments, and we can only recognize their effectiveness in clearing different disorders. There are though three intriguing aspects and another one that is quite clear.

Even though Sun Simiao’s list of 13 points is famous and can be easily found everywhere on internet, no one seems to be interested in their therapeutic effects. Yet this is the most important key to understanding the purpose of this family of points that are supposed to defeat ghosts.

Without looking too far, let’s see what they do:

A simple reading of the effects and recommendations of this list of points allows us to quickly understand what it is. Most of the points have effects against one of the worst pathological pictures there is, Wind-Heat accompanied by pain. They are almost all recommended in cases of mental and psychosomatic illnesses with the disorders that accompany them. Now, let’s put ourselves in the shoes of an ancient Chinese from 3000 years ago. Seeing epilepsy, sudden apoplexy, a bout of dementia, a face twisted by facial paralysis, restlessness, there could be no modern understanding of these disorders, psychoanalysis having not been invented.

So, it could only be the action of evil spirits who came to agitate the person from within. We are therefore spot on the treatment of psychiatric disorders according to Chinese medicine. There are no ghosts behind all of this and no need for exorcism. On the other hand, the use of these 13 points will be highly beneficial to all the people who suffer from these disorders. That is why it is very interesting to know them and add them to your bag.