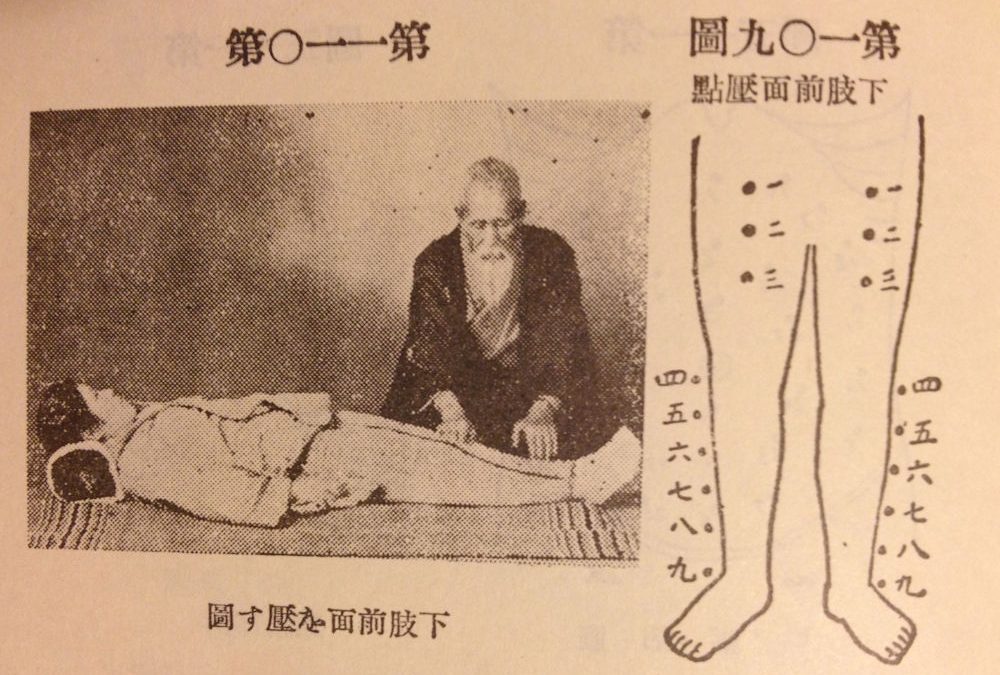 Simplistically, we can divide the history of Shiatsu in a few chapters and name them in correlation with major historical events. Although we may find the ancient traces of Shiatsu in the incipient forms of Japanese bodywork, the first chapter in the history of Shiatsu is actually the Prewar Chapter. This is the time when Shiatsu emerges as the name for a new therapy and it culminates in 1939 with the publishing of Shiatsu Ho, written by Tamai Tenpeki. The following chapter in the history of Shiatsu, the Postwar chapter, is dominated completely by Tokujiro Namikoshi. Abundant in impressive achievements performed by Tokujiro Namikoshi, such as astounding successful treating of the rich and the famous clientele, founding clinic and institute and peaking with the obtaining of the official recognition, it’s no surprise that this chapter outshines the Prewar chapter.

However, the Prewar Chapter is critical for understanding the history of Shiatsu. I feel that there is not enough awareness in the worldwide Shiatsu community of the importance of the developments from this chapter.First and most important thing: nothing from the Prewar chapter escaped outside Japan.Tokujiro Namikoshi was aware of the importance of spreading Shiatsu overseas. He dispatched masters to United States and taught himself classes in the United States. Shizuto Masunaga also taught classes outside Japan, both in the United States and in Europe. Both Namikoshi and Masunaga left behind them institutions that faithfully had been carrying on their legacies.Compared to Namikoshi and Masunaga,Tamai Tenpeki didn’t start an official school, didn’t obtain the official recognition, didn’t travel abroad to teach Shiatsu. But, he was the first to write a landmark book in the field of Shiatsu. His legacy is compressed in his book, Shiatsu Ho. Given the worldwide dissemination of Shiatsu today, for me, it’s still unbelievable that Tenpeki’s book was NEVER translated into English or in any other non-Japanese language. The book has been re-edited a few times but if you don’t read Old Japanese, you may never know what Shiatsu was like in its formative period.

“Stephen Brown was born and raised in Japan, and he graduated from the Japan Central Acupuncture College in Tokyo in 1983. After becoming licensed as a shiatsu practitioner and then an acupuncturist, he studied Zen Shiatsu at Masunaga Shizuto’s clinic in Tokyo. In 1984 he went to Beijing, China to attend the Advanced International Acupuncture Training Course at the Academy of Traditional Chinese Medicine. After returning to Tokyo, he continue his studies with renowned teachers including Manaka Yoshio MD and Serizawa Katsusuke. He moved to Seattle in 1986 and opened his practice and began teaching shiatsu and acupuncture at the Northwest Institute of Acupuncture and Oriental Medicine. Later he taught at the Seattle Institute of East Asian Medicine from 1997 to 2019. Being a native speaker of Japanese, he has translated many texts on Oriental medicine and has served as an interpreter in seminars of Japanese traditional medicine. Most notably he has translated Shudo Denmei’s text and promotes Shudo- style meridian therapy.” NAJOM, Volume 27, Number 79, published in July, 2020.

Stephen Brown accepted the challenge to translate “Shiatsu Ho” in English almost one year ago. Upon a quick look over the last edition of the book, he decided that almost half of the content of the book is quite dated and it’s not worth the hard work required for translation to English:“It would be quite an undertaking to translate this classic of shiatsu. At first I considered just writing an article about Tamai’s text for NAJOM. Looking at it closely, however, I discovered almost half of this text is about Western medicine. It goes into great detail describing Western anatomy, physiology and pathology of the early 20th century. Of course some of this is outdated and readers in the West don’t seek such information in a shiatsu text. Tamai’s Western medical orientation makes sense in the context of early modern Japan trying to legitimize itself to the world and catch up with Western science and technology. The readership at the time would have been impressed with Tamai’s modern perspective applied to his unique approach to bodywork.…I believe the real value of Tamai’s text for modern readers lies in the parts that explain his techniques and his unique perspective of the human body and healing work. So I will skip those sections about Western medicine and translate only those parts that relate specifically to shiatsu and share my view along side it.”Stephen Brown, NAJOM, Volume 27, Number 79, published in July, 2020

I took the liberty to post a few quotes from the first paragraphs translated for the first time in English by Stephen Brown. My goal is to raise awareness about the importance of the work that Stephen Brown is doing these days. This is our chance to get a glimpse of what shiatsu was in the vision of its founder. That’s why I encourage everyone of you to support Stephen Brown’s work by purchasing a PDF article from NAJOM. The current price is $1 per PDF article, it’s a total steal for the value you get. It’s very simple: just write an email to najom@shaw.ca and ask for the two PDF articles. You will receive the PDF articles by email and another email with PayPal payment instructions. Thank you!