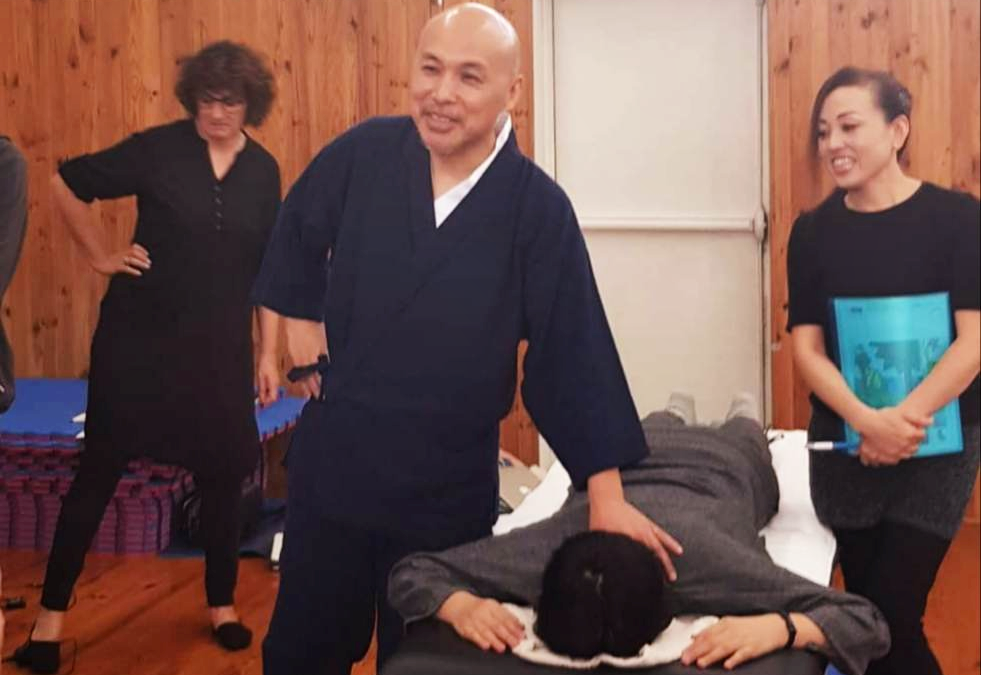 Mitsutoshi Taniguchi has many strings to his bow. More than 30 years ago, he started studying acupuncture and graduated from a medical university in Osaka. Among other things, the programme included Judo therapy, oriental medicine and of course Shiatsu. His passion for healing took him to China, Belgium and more recently to France and Rwanda where he started training therapists in Keiraku massage combined with Shiatsu through the school he created two decades ago: The Japan Body Care Academy. In this interview he tells us about his journey and the purpose of his school.

On this first weekend of October, I had the great pleasure to participate in the very first seminar of the technique called Keiraku, taught by Sensei Mitsutoshi Taniguchi. I would like to thank my Japanese friend Mieko Larré for this meeting. This very nice shiatsushi, after having studied in Mitsutoshi Taniguchi’s school in Tokyo, decided to organise this two-day course in France to introduce us to his art. He kindly accepted this interview to get to know him better and to know the origin of the techniques he teaches. I found a mild-mannered man who likes to teach while joking and who is very approachable.

Odile Fayet : Would you like to tell us about your background? Where were you born? How was your family surroundings and how about your childhood?

Mitsutoshi Taniguchi: I was born in 1964 in Osaka in Japan. This year I am 55 years old, I’m getting old! (He said joking) When I was in high-school I started to practice base-ball but at 17 years old I got a bad elbow injury and I could not throw strong balls anymore. Since base-ball was everything to me I did not know what to do. I lost my dream. I was living in Osaka at the time and although it is a nice city there were some bad boys and my town was not particularly easy for children. These boys wanted me to join them to misbehave and I was tempted but I thought it could be dangerous.

Oh my, what a difficult situation! So what happened then? Can you tell us more about your training years? Did you study shiatsu first?

My father saw that I was lost because I couldn’t fulfil my dream, so he told me that maybe I could help him. At the time, he was studying acupuncture at Kansai Medical College. My father was a banker who decided, at the age of 45, to change his career. He wanted to study Oriental medicine, acupuncture and moxibustion. He challenged me to study acupuncture with him and I passed the exam.

At first I didn’t like it because I always had it in my head that I wanted to be a famous baseball player, I wanted to be a star. Then I decided that if I was going to do this job, I would be the best. So in the early 80s, while I was learning Oriental medicine, acupuncture, moxibustion, Shiatsu, massage, Anma and Judo therapy (a type of Japanese osteopathy) at the same school as my father, I was treating about 40 patients a day at the clinic. For 5 years I studied and gained experience at the same time.

So you learned Shiatsu and other therapies at the same time. Is that when you started martial arts as well?

My uncle was a martial arts Sensei and his dojo was at my house! So I practiced from the age of 6 until I got my martial arts degrees. I am 1st Dan in Shorinji Kempo[i] and 2nd Dan in Toyo Kempo.

I see, so did you continue to practice at the clinic?

In 1988, after graduation, I wanted to see real Traditional Chinese Medecine, so I decided to go to China and joined a university in Guangzhou, about 3 hours by train from Hong Kong.

I started to study acupuncture and moxibustion but in June 1989 there were the protests in Tian’anmen Square and the university closed so there was no meaning to stay there and I returned to Japan. Upon my return I thought of two friends.

While in China I had a German roommate, Alexander Meier who could speak very good Chinese and English and advised me to learn English too. So I thought of going to England but my only contact was a Belgian friend, so I went to live in Brussels thanks to her and I found a job in Antwerp at an acupuncture clinic. I was very young then but I had quite some experience and I was happy to realize my Japanese acupuncture techniques were painless to the Belgium people.

I did that about a year. Unfortunately I was on a tourist visa and since I spoke no French and my diploma was not valid in Belgium I had to return to Japan.

So back home again?

Yes, my mother sent me a letter saying my father was about to open a clinic but she was afraid he would scare the clients away. See, my father is a very clever man but rather harsh in his communication, so I went to help to take good care of the clients! (Laughs)

Did you specialize in acupuncture or did you practice shiatsu also. And if so, what style of Shiatsu?

I am often asked this question. I know Shizuto Masunaga is very popular in Europe but not so much in Japan. Namikoshi is well known but I never really cared about what kind of shiatsu I practice. I just do!

So you have no master! (We laughed together) And what about Karate, would you say it helps you gather your Ki?

As I told you earlier, I started very young at my uncle’s school so I have learned long ago how to feel my energy and how to use my power. The thinking is the same with baseball… but it is difficult for me to explain. Sorry.

All right. What about Japan Body Care Academy? How and why did you start? Can you tell me the specificities of your school?

I created JBCA 20 years ago. We are based in Tokyo. I found my techniques gave very good results but if I practice alone, there is only a small number of people I can treat. So, I decided to teach my methods so that many people could benefit from it. The combination of my knowledge in acupuncture, judo therapy and shiatsu brought me to develop the Keiraku techniques I teach.

Would you like to develop in Europe and how did the school In Rwanda start?

Yes of course, I wish to develop JBCA in Europe.And Rwanda is a very long story! Lol

Sometime ago, Mio Yamada, a former Japanese student sent me an email. She told me she was living in Rwanda where she opened a restaurant. One day, a client saw her diploma in shiatsu massage hanging on the wall and she felt very enthusiastic about learning shiatsu. Her name is Beth, she is a Rwandan therapist who was already teaching massage techniques to blind people as it is very difficult for them to find a job and she also wanted to teach shiatsu.

So in September 2018 I went there to teach the Keiraku techniques. Now we already have 5 therapists working there.

Very well, so it is fairly recent and moving forward. Could you tell us if you find differences in body texture between Africans and Japanese?

Now you are in France for a few days to teach here for the first time. Let’s hope things go well for you here too. Thanks to your son, you also communicate with videos via You tube and Facebook. And I know that you have written books. Do you intend to promote them as well?

Well, I have written “Keiraku Sutoretchi Ando Rinpa Massaji” [ii] (Japanese edition), another on meridian massage and lymphatic system (Nihon Bungeisha) and one on the use of a ball (Makino Publishing) but they are only available in Japanese and Chinese. In the future I would like to write a book on Keiraku techniques and translate it into English.

Before leaving, is there something you would like to add? A tip to give to practitioners around the world?

Well, my parents taught me “if you want to do something, do it, life is very short. Enjoy it!”

So that’s the lesson. Be what you want to be.

You wanted to be a star so are you a star now with Japan Body Care Academy? (Both of us laughing)

When I was young I wanted to be a star but now I am a wise old man! (smiling)

There is an old saying in Japan that says “live for others”. That would be my message, be kind to others.

Merci beaucoup (“Thanks a lot” in french)