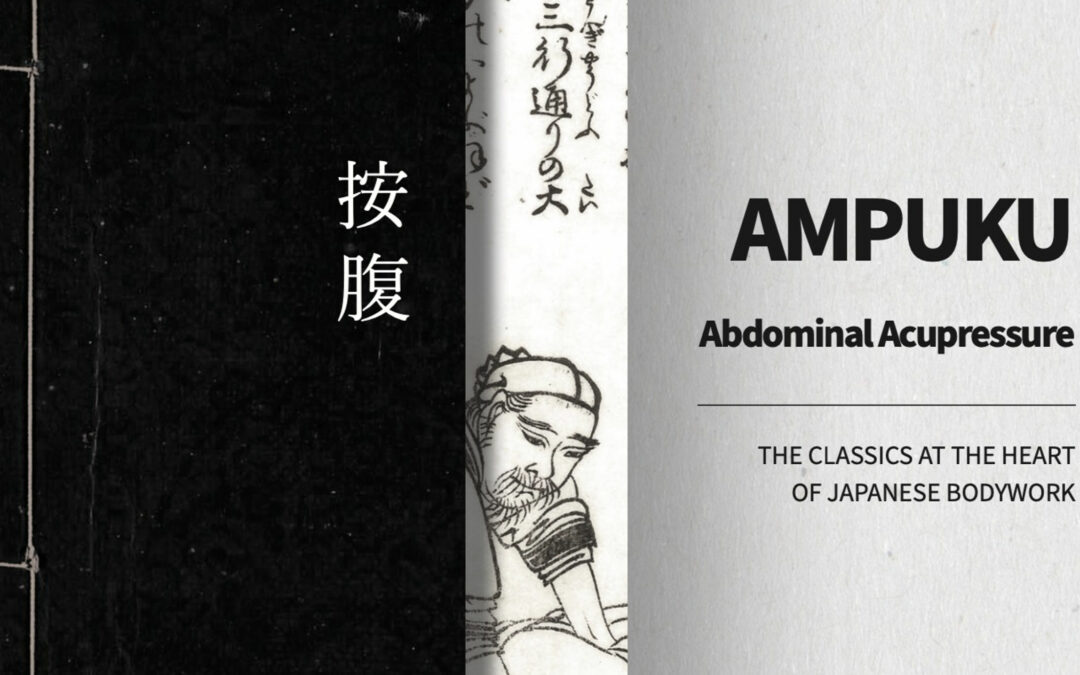 The book Ampuku by Philippe Vandenabeele is a must have in his library. It will delight historians, those who seek to understand the original techniques of Shiatsu, lovers of ancient images and explorers of all kinds. But this book marks an important turning point for Western Shiatsu: the beginning of the translation of the reference books of Japanese Shiatsu.

You should know that when I review a book, it is because I have read it in its entirety and in great detail. That is why I write about it long after it has been published. Philippe Vandenabeele kindly sent me a copy a long time ago, but I have only recently been able to read it. And I have to admit that the pleasure of reading ‘Ampuku’ lives up to the expectations.
A little historical reminder
Shiatsu is not a creation ex nihilo. It comes from the Anma which was divided into two branches: the classical and medical version called Koho Anma and the popular version performed by the blind. Over the centuries Koho Anma has almost disappeared, mainly due to the influence of Western medicine. Fortunately, some talented practitioners wanted to revive this magnificent technique. At first they called it Happaku ho (acupressure technique), as it was when Tokujiro Namikoshi opened his first clinic in Hokkaido. The term Shiatsu came later. In terms of literature, in a very simple way, there were three major books which are usually referred to as the founders of Shiatsu:

1- Anma Tebiki, written in 1799 and published in 1835, by Fujibayashi Ryohaku
2- Anpuku Zukai, published in 1827 (so the first one to come out), by Ota Shinsai
3- Shiatsu Ryoho, published in 1939, by Tamai Tenpeki, the founding book of the term Shiatsu

In Philippe Vandenabeele’s book, the first two books are not only presented, but also analysed and Anpuku Zukai is entirely translated, page by page. It is therefore a titanic task (and a painstaking one) that this book offers us, because it takes patience to translate the turns of phrase and thought of ancient Japanese. But what a result. First of all, I liked the clever layout of the book and then I was captivated from the first page by the historical account of the manual therapeutic arts in Japan in which I did not find any error, which is unfortunately too often the case in most of the books I consult. For that reason alone, I recommend this book.

Structure of the book

The book is structured as follows:

1- A historical introduction, presentation of the literary classics on Anpuku work and a lot of interesting reflections and analysis from the author.
2- The list, meridian by meridian, of the points used in Anpuku, which are finally quite few. But here we will enjoy the images taken from old Japanese manuals
3- The picture by picture explanation of the book Anma Tebiki
4- And finally the complete translation, image by image, of the book Anpuku Zukai, currently being translated in NAJOM

I might as well tell you that this is no mean feat, because although the text can be read quickly, understanding it and trying to integrate it into one’s practice is far less easy. You will have to see it again and again, read it and re-read it to move from the book to the hands, from the intellect to the practice. Not that it is very complicated to read, but as is often the case with the Japanese, the explanations are rather elliptical. And it is like everything in our art, it takes time.

At the end of the book, however, one has a taste of “not enough”. We would have liked more explanations to be able to do something with it all. But a small white note on the cover of the book caught my attention: “Volume 1”. I asked the author what this meant and this is his answer: “A second volume is being prepared for 2022 on the practical application of the Anpuku books”. That’s great! So finally all’s well that will end well in the next volume.

In any case, this book (for the moment in English only while waiting for the French and Dutch versions) has immediately become a must-read along with the one published in Italian on the same subject (I will talk about it). Don’t wait for the next volume to come out and add to your library now (you can find it just about anywhere online), as it finally unearths a big piece of the history of our therapeutic art. I can only call for more Japanese books on Shiatsu to be translated or, as here, even before the creation of Shiatsu.