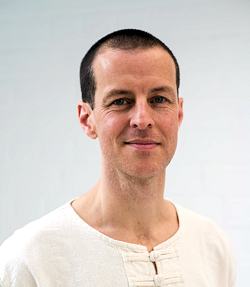 Ivan Bel discovers Shiatsu in the summer of his 30th birthday during an intensive Aikido training. Initiated (several times) by François Dufour, he decides to study Shiatsu. He organizes a course at his home with Françoise Battalion (Iokai Shiatsu style), but his group does not pursue. He then crosses the path of Lucy de Mooy, Dutch woman trained in British Columbia and he learns the Namikoshi Shiatsu in particular course for 3 years at his side. After moving to Belgium, he immediately joined Yuichi Kawada’s Yoseido Shiatsu School, which he attended for 4 years. The style of this master is a mix between Iokai and Namikoshi styles, but above all he discovers the depth of Japanese teaching: do rather than talk, feel rather than think.

At the same time, he has been practicing martial arts for 30 years, firstly Japanese (Aikido, Karate and Iaido), then Sino-Vietnamese (Qwankido, Taijiquan, Qigong), which gives him the necessary grounding and discipline to advance in Shiatsu and to understand the sense of movement and use of the body in Shiatsu. He has been studying and teaching meditation for 25 years, which allows him to deepen the intimate understanding of the mind-body and the mechanisms of thought and emotions.

Founder of the Biloba Network and the European School of Massage in Brussels, he is now a member of the UFPST’s management board, alongside with Bernard Bouheret. Engaged in the defense and promotion of Therapeutic Shiatsu (especially on the website ufpst.org) he realizes that his teaching is the result of different styles of Shiatsu studied and their combination with the martial arts and meditation. He summarizes this triple way (with his friend Philippe Banai) in a style that corresponds to him: the Ryoho Shiatsu, which he is the founder and technical director. A new adventure begins …